Great Grandmaster Ernesto A. Presas Sr. was born in the coastal town of Hinigran, Negros Occidental on May 20, 1945. At age 8 he began his training under his father, Jose Presas, a well known escrima practitioner at that time. He went on to be an athlete in his college years, participating in various sports. His training in the martial arts is eclectic, having studied jude, jujutsu, karate and various forms of Filipino and Japanese weaponry. He is currently a Lakan Sampu (10th Dan) in  arnis nd Mano Mano (hand to hand combat) and holds a Lakan Walo (8th Dan) in Philippine Weaponry.

GGM Ernesto Presas and his brother Prof. Remy Presas both recognized that the classical arts of their country were losing their appeal and therefore slowly dying. Both sought to modernize the native arts into an effective fighting system that would be appealing to martial arts students living in modern Filipino society. Their dream to re-introduce his native arts led to the development of  Modern Arnis. Ernesto Presas would later re-christen his version of the art Kombatan. 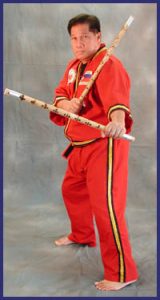 ilippines and Lyceum of the Philippines. Later other classes expanded to the University of Santo Tomas, Central Colleges of the Philippines, the Far Eastern Military Academy, Philippine National Police Academy and the Philippines Air Force Officer’s School. Also in 1970 he was invited to Japan at Expo ’70′ to demonstrate Arnis. He quickly earned the respect of many of the Japanese masters who called his Art Filipino Kendo. After returning home, with the help of his friend Frederico Lazo, he opened his first club. Later he formed the Modern Arnis Association of the Philippines International and the ARJUKEN (which stands for Arnis, Jujutsu, Kendo) Karate Association to formally spread the art within the Philippines. In 1975 he founded the International Philippine Martial Arts Federation (IPMAF) and began to spread the Filipino art to the outside world. In time his Arnis

Kombatan is a composite of various classical and modern fighting systems used in the Philippines. The student of Kombatan is introduced to the various systems described above in the full range of fighting. An emphasis is placed on drills to train the student to react instinctively. Students are encouraged to develop their own “style” of techniques within the Kombatan framework.

In contrast to many other oriental martial arts, the Arnis student first learns how to handle and defend against weapons. This philosophy is to a large degree culturally bound, but also has a practical application. The Philippines has traditionally been a blade-oriented society. Even today, in many rural areas both men and women use swords and knives in their daily work. Self-defense using a blade is the preferred methog. In a practical sense, the rationale for training a student with weapons first and then later with hands and feet is (1) training cane to cane is safer than taking punches and kicks to the body, and (2) if you can defend against a weapon then fighting against punches and kicks will come easily because training with canes conditions one to avoid errors in judgement.